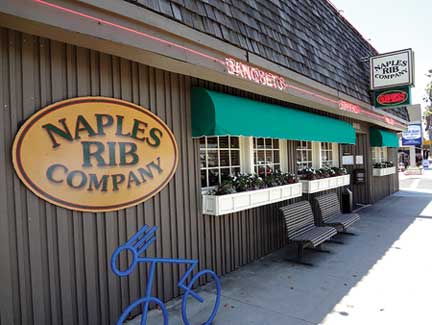 The restaurant is located in a nice area in Long Beach on 2nd street. I was a little worried before we went in as I did not smell the familiar smoke that I look for as a sign of delicious BBQ. In we went. We were greeted by a very friendly hostess who seated us right away. Our waiter showed up right after we were seated to get us started with drinks. We were ready to order! After asking the waiter a few questions, I found out that the ribs were not smoked, rather they were grilled. The brisket was baked, grilled, then placed back in the oven to finish baking, but it did come in slices according to my waiter, so I was willing to try it. Ok, you can come up with some great rib favors through grilling, and I wasn't afraid of trying the brisket baked (at least not outwardly!) so I ordered a grilled artichoke as an appetizer, and for the main course, the spare ribs and brisket with no sauce (I always feel BBQ served drenched in sauce is trying to hide something). I also ordered the Louisiana Hot Links for good measure. Roasted vegetables and cole slaw for the sides. My BBQ buddy had the BBQ chicken, with corn on the cob and Mac & cheese.

The artichoke was about a quarter of the whole and it was grilled with a nice and tasty char! Served with mayonnaise, drawn butter and hollandaise sauces for dipping. Unfortunately they had removed most of the heart (my favorite part), and the leaves, while tasty, were disappointingly tough to get any meat off. Oh well, bring on the main course!!

My platter came and the brisket was not sliced, but chopped and in BBQ sauce so heavy that it might as well have been soup! My waiter must have noticed my disappointment as he apologized that he was wrong about it being sliced and that it had been drenched in sauce. He said he was unaware that this was the only way they served brisket. Really??? The spare ribs looked as pale as if they had seen a ghost! What!? No rub!? No sign of marinade!? Bummer! They were anemic and dry. I had to put some of the sauce that was placed on the side to give them any flavor at all. I was unable to force myself to finish either the ribs or brisket, and not because of the portion size! The Louisiana Hot Links on the other hand, were perfectly grilled. Though grilled and not smoked, they were juicy on the inside and the casing had a great snap!! Those I finished like a rock star!! They were the only redeeming thing on the platter. The chicken on my BBQ buddies plate was too dry to try and finish. Only a few bites of the half chicken were taken, and no, we did not want to take the rest home in a box. The Mac & Cheese, (one of our favorite things to order whenever we can.......it's the simple things) had an oddly cheese food flavor rather than real cheese. If you like Velveeta, then this Mac & Cheese is just what you're looking for. Not for us though. We like it nice and CHEESY!! And this wasn't! Oh well, our first stop of the BBQ tour was disappointing. Maybe it was an off day. I'll let you decide if you ever make it out that way. Let's see if a new day will deliver on the promise of Great BBQ!! Remember folks! Barbecue is Love, and we all need Love!