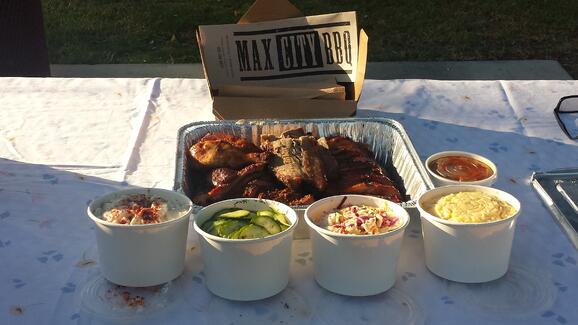 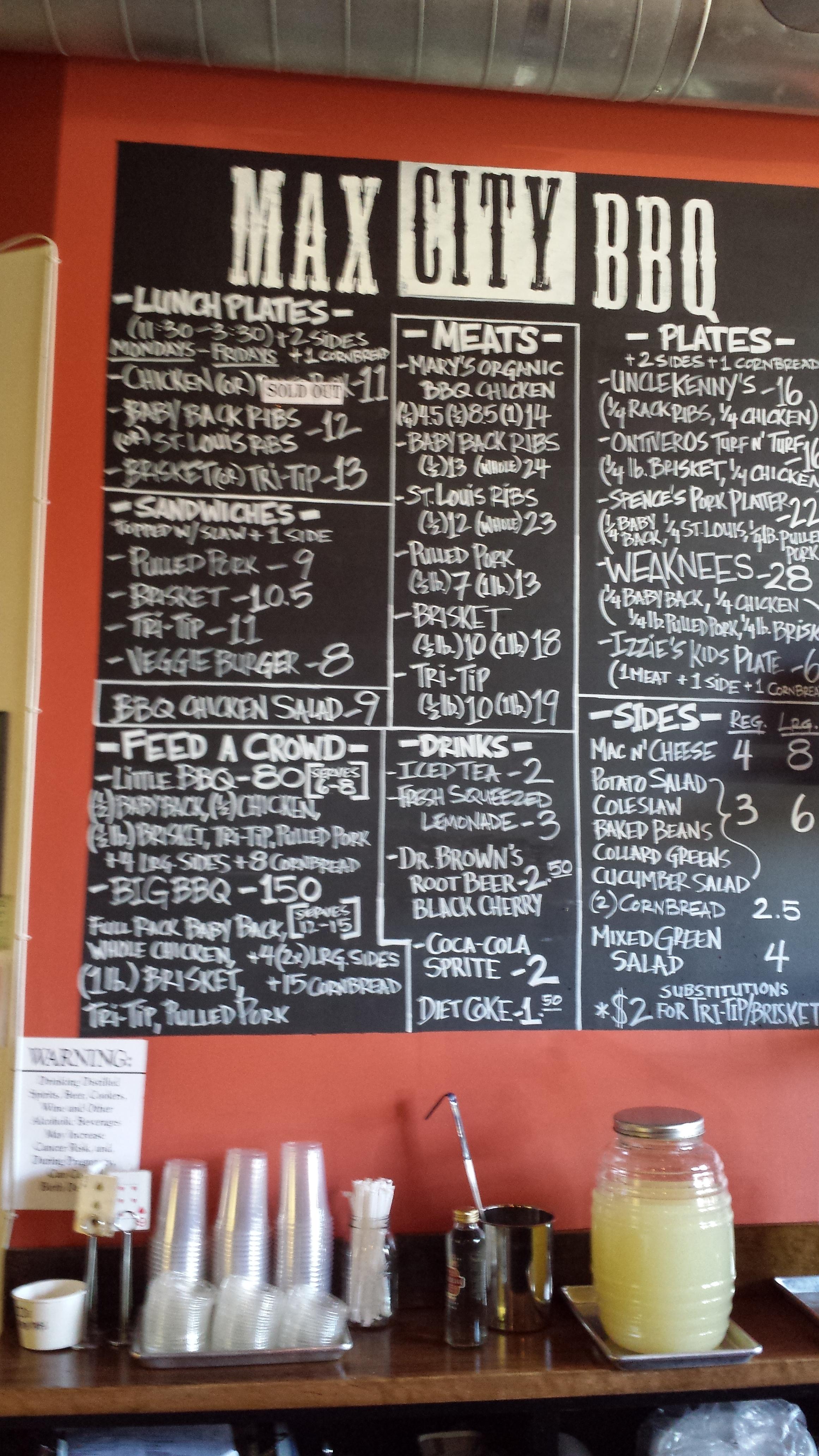 Now, I don't have a problem with that, as one of my favorite bands, Toad The Wet Sprocket, put out their latest album (yes, I said album, I have been around since the 60's, and some things other than Bruce Willis just die hard) with Kick Starter and I was happy about that. It was time to see if I would be grateful that Kick Starter helped Max City BBQ get it's start. We had pre-ordered our meal by phone and were to pick it up at 3pm. They called us right at 3 because we were running a little late. They asked if we were still coming. 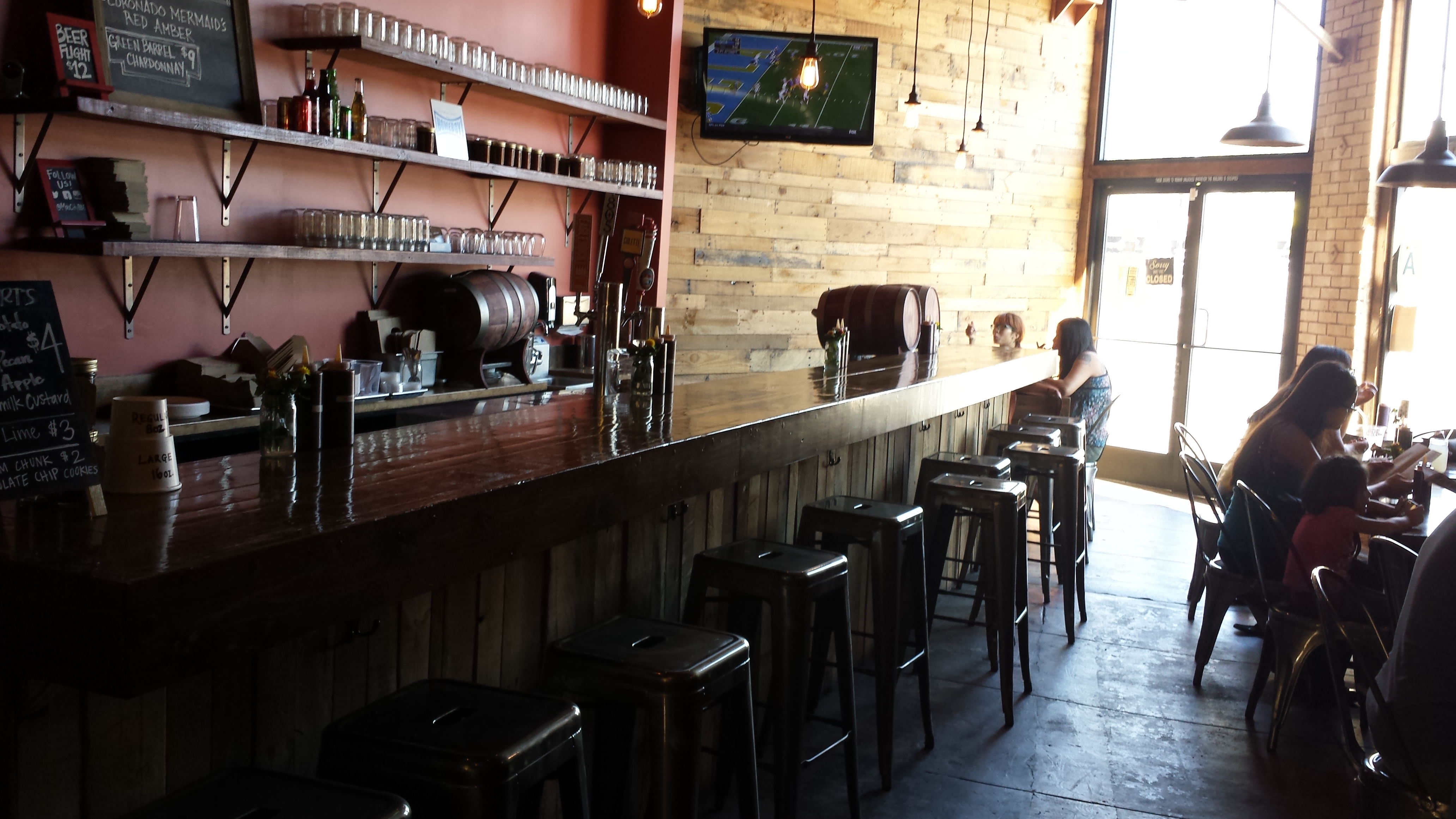 It is a small place and you have to be careful not to blink so you don't miss it. We pulled around to the parking area, which was located in the back and shared spaces with the liquor store next door. We went in through the side entrance at the back of the restaurant and were greeted with a very friendly staff. The decor was very bar and grillish, and was nice and clean with a nice rustic twist. Most importantly, you could smell the smoker going full bore and it was a very pleasant aroma of meat on a smoker. Max City BBQ uses oak to smoke their meats and are really excited to talk about theirs smoking process. A gas fired wood pit smoker was the workhorse. This was a very promising sign. Yes, I was seeking a sign, and I found it! We paid the bill, and all of our food was packaged nicely for us to take to our picnic spot. 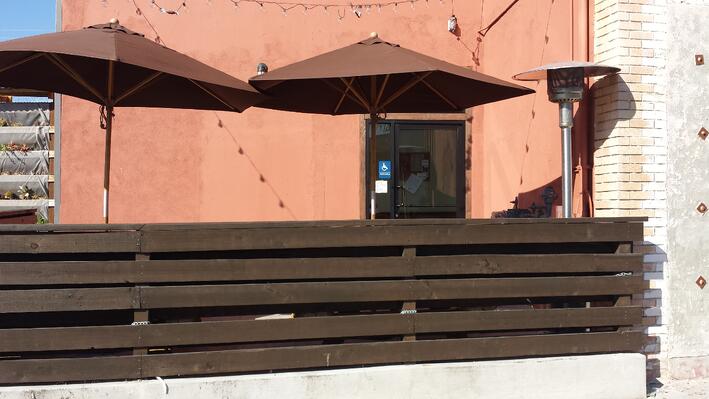 We met with our boys and the 4 of us dug in. It was a beautiful sunny day, (what a shock) and we were hungry. The meats in the package were, Baby back ribs, brisket, pulled pork, Tri tip, and chicken. Everything was good, but I have to say that the brisket was particularly fantastic. The Tri tip was a little well done and I must say that after having Tri tip at Shaw's Tavern in Santa Maria, it's not really fair to judge this Tri tip by those standards, but I had been jaded. It was ok, but just too well done. The pulled pork was moist and full of flavor as was the chicken. Both were home runs! The ribs were also really good. Everything was seasoned with a nice rub and needed no sauce whatsoever. They served it with sauce on the side, and I didn't even have to ask. I love that because they are so proud of their BBQ that they are confident it can stand on its own. Confidence is a very attractive trait you know. The sides were really good as well. We got the Mac&cheese, which was fantastic. The cucumbers in Italian dressing, nice and crunchy with a tasty zing! The slaw was good and the potato salad was the only thing that was just ok.

All in all, it was a magnificent feast for this son of a butcher. Yes, I have been affectionately referred to as that BBQ SOB (son of a butcher). I would highly recommend a trip to LA to try Max City BBQ. Tell them that Casey Jones sent ya!

Remember to show how much your loved ones mean to you by barbecuing for them, because as I always say, Barbecue is love, and we all need love.